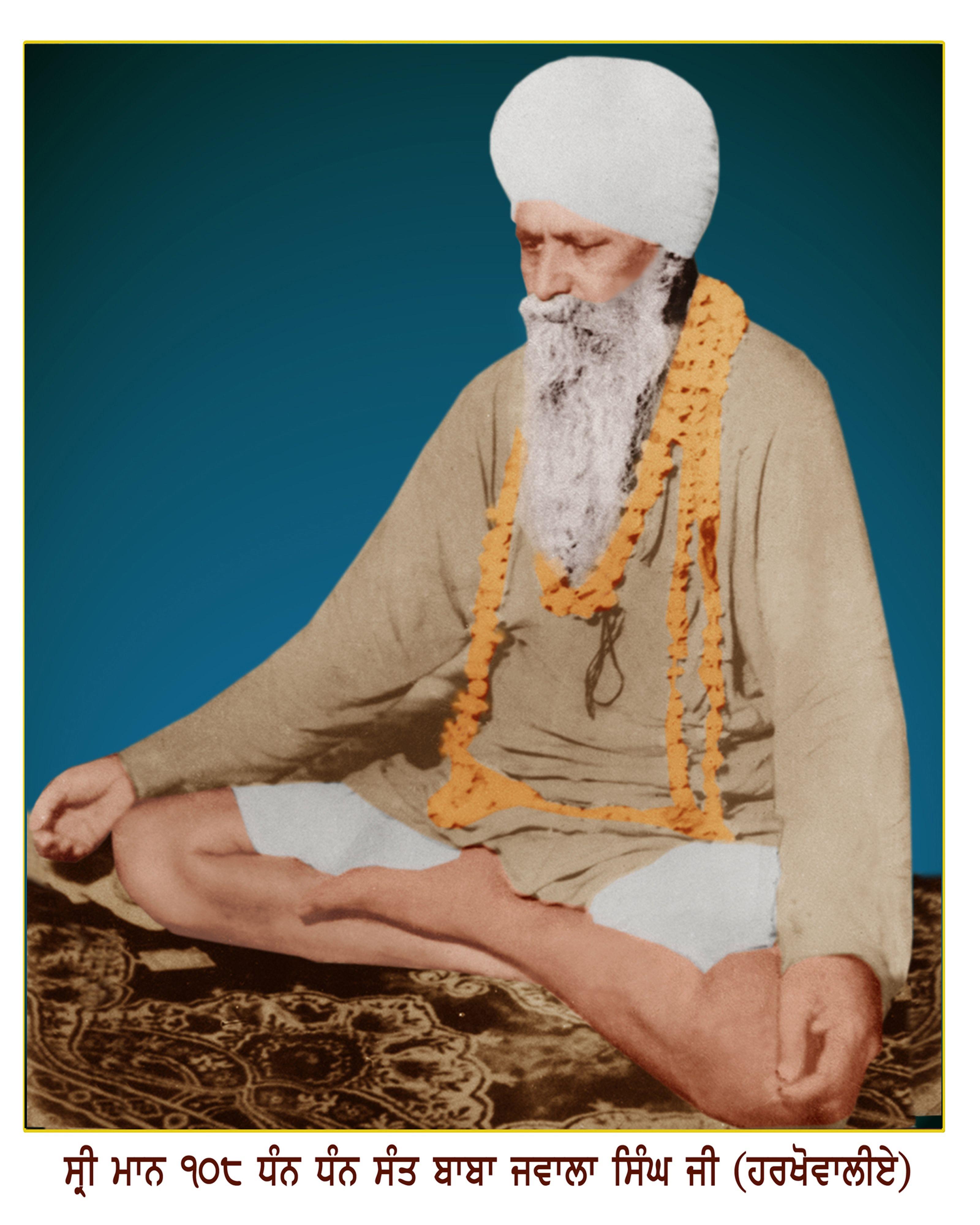 Blessed are the parents who have given birth to this holy child, blessed is the village, the town, the city nay the whole world where this Glory of God will physically stay and stride upon.ਕਰਉ ਬੇਨੰਤੀ ਸੁਣਹੁ ਮੇਰੇ ਮੀਤਾ ਸੰਤ ਟਹਲ ਕੀ ਬੇਲਾ ||Listen, my friends, I beg of you: now is the time to serve the Saints!

Dhan Dhan Sant Jawala Singh Ji Harkhowal wale was born on 1 may 1889 at Langeri, a village in Hoshiarpur district. From his very birth, Sant ji was never seen weeping or laughing. He had never cried for milk, had never demanded or asked for anything to eat because he was far above the human instinct of hunger and thirst. He was completely indifferent to heat and cold. He was totally free from delight and anger. He had no desire and was totally free from all worldly attachments. He was always established in some deep meditation and his face glowed like a sun. He was always in the highest state of bliss. His holy face radiated with a unique flood of light. Once a dark room was aglow with that dazzling light (parkash) of his divine face, where he was sitting in meditation for a few days in his youth.

Sant ji received instruction at the village primary school and at the gurdwara. Tall and of athletic build. Then Sant Jawala Singh ji joined the army on 5 January 1907 as a soldier in the 35th Sikh Battalion. It was during his service at Rawalpindi that he came in contact with Sant Baba Aaya Singh ji, spiritual successor to Sant Karam Singh of Dera Hoti Mardan, a village near Mardan cantonment in the NorthWest Frontier Province. Sant Baba Aaya Singh Ji Maharaj asked Sant Jawala Ji Maharaj – “Have you reached Jawala Singh? Where were you this long? It seems as though we have known each other a long time!” They saw each other and exchanged thoughts silently with each other from heart to heart, mind to mind and soul to soul.He formally became a disciple of Sant Aaya Singh ji on 5 March 1911. It was from this point that Sant Ji Maharaj began practising intense meditation.

During World War I, Sant Jawala Singh ji went to France but afterward Sant ji resigned from the army on 1 January 1917 and Joined the Dera at Hoti Mardan to devote himself to a life of contemplation and service. At the persuasion of Sant Harnam Singh Ji of his native Hoshiarpur district and with the permission of his religious mentor, Sant Aaya Singh Ji , Sant Jawala Singh Ji returned to the Doaba region in nearly December 1918 and settled in a lonely place between the villages of Harkhowal and Pandori Bibi, about 11 km southwest of Hoshiarpur. Here Sant Jawala Singh ji starts sewa of Gurbani. Many people came to know about Sant ji after day by day. And Many of vilagers become the follower of Sant ji. Sadh Sangat requested to Sant ji that they are worried about Sant ji’s Health as Sant Ji don’t have a house so they made a small kutiya for Sant Jawala Singh ji to live.

At the request of followers and the whole sangat , Sant ji agreed to make a Gurudwara. But he had some conditions . After all the conditions fullfill by Sant Ishar Singh ji Mast. Sant Jawala Singh ji established a Gurudwara and give the name of that Gurudwara was ‘SantGarh‘. Dera SantGarh, the name by which this Gurudwara came to be known, attracted Sikhs in increasingly large numbers.

It was from this point that Sant Ji Maharaj joined in excessive meditation within the dera santgarh harkhowal with Sant Baba Ishar Singh Ji Mast.Sant Baba Jawala Singh Ji give preaching to sadh-sangat:-“By focusing on meditation, and going down that route alone, one will not achieve salvation. There are 4 types that you will get to though. They are1.) Verse emancipation: the form you focus on, you can get to their realm.2.) Proximate emancipation: that form that you focus on, you can get close to it, but never fully become part of it3.) Ornate emancipation: you will become like the form that you worship, but you won’t be the form.By following these routes you are not at a stable state because a time will come that no form of Maya whether it be tangible, body, gun or astral, spiritual will remain. All will devour. That is why Guru Gobind Singh ji’s Singh doesn’t want any of these emancipations. These emancipations will not allow one to dissolve into Akal Purakh.The following question was then asked: How does one get to that point where we become one with god?Sant Baba Jawala Singh ji answered:Hey Gurmukho, the shabad, which is the emanation and procedure of Guru’s heart, that shabad is Brahma. Get absorbed in that shabad and you will find that you no longer exist and that is the way that you will get emancipation. Guru Ji has used the following lines in Gurbani to explain this……1) Sabad gur peera, gaher gambeera, bin shabadai jag baugaanang.2) Satgur bachan, bachan hai satgur paadhur mukat janavago3) Etc. etc. (more bani was said to reinforce the point)

It is for this reason that Gurmat is focusing on god through shabad because shabad has 3 forms according to wise mahapurakhs:1) Asthool: when your eyes gaze on a Granth and you read those letters out loud2) Misrat: when one’s focus/attention becomes attuned to the shabad, the shabad is both spiritual and asthool because the mind is made of the virtue/true/purest form of the qualities.3) Sookham: SpiritualWhen the meditation on the shabad exceeds the consciousness of the mind, and gets absorbed in the celestial emanations of the primal sound. This is also called, sounds of the naval chakra. That baani has the ability to take the consciousness of the being to the pinnacle point of Brahms (the point from which creation was started).