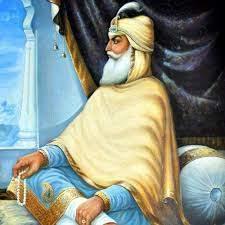 A few Sikhs of Kashmir took Baba Sahib Ji with them. The philosophy of Guru Nanak Dev Ji was preached by Baba Sahib Singh Ji amongst the Kashmiri Sikhs. They were taught by Baba Sahib Singh Ji to meditate on Waheguru Ji’s name, to work with their hands honestly, to share the excess with poor and needy and to live their life without fear and hatred. Baba Sahib Singh Ji came to know during this period that his father has left for heavenly abode at Sri Patna Sahib. Bhai Sahib Singh Ji after completing the Bhog of Sehaj Paath, arranged a large Langar for Sikh Sangat.

From a very young age Baba Sahib Singh Ji was living in a Grahist (household) Jeevan. Bhai Sahib Singh Ji continued to follow the path of Sikhi by joining Sikh Sangat and at the same time he used to maintain his Grahist Jeevan also. During this period of time, emperors like Abdali, Duraani, Mughal’s, Pathan’s and shortly afterwards the British engaged in atrocities and robberies of civil people. Baba Sahib Singh Ji knew that the pain will be caused to the Sikhs of Guru Nanak by all this. He was acknowledged that the land which is blessed by Gurus will be ruled over by the corrupt rulers and governments. Several weapons and horses were collected by Bhai Sahib Singh Ji at Shri Una Sahib while doing the preparation. Baba Sahib Singh Ji would get up in the early hours of the morning and would do the meditation for hours, then would request Rababiye Sikh to do Kirtan and would join them himself. Baba Sahib Singh Ji had become so attached to Waheguru Ji that he would not eat and drink for a long time and would not feel hunger or thirst. From very starting, Baba Sahib Singh Ji used to eat very little.

One day Baba Ji sat in Samaadhi outside and did not rise. The morning passed, then evening and then night but Baba Ji did not rise. Three days had passed the same way but Baba Ji was not awake. Then the third day a land-owner had prepared a meal for Baba Ji. But seeing Baba Ji sitting in Samadhi, he did not feel right to awake Baba Ji from his Samaadhi. But decided in his mind that he will also eat his meal with Baba Ji, otherwise he will also not eat anything. After two hours, Baba Ji opened his eyes and told that devotee to bring that meal. Baba Ji told the devotee that, “We had decided to meditate on God for longer hours, but seeing your love and devotion I decided to grant your needs and wants.” The holy men use to pray for the well being of their Sikhs when they get happy over the love and devotion of the Sikhs.

Those were the blessings of Baba Sahib Singh Ji that Maharaja Ranjit Singh Ji was blessed with Sikh empire and its kingdom. Travelling from Rawalpindi Baba ji heard the news that Sardaar Maha Singh Gujranwale of the Shukrachariya Misl had passed away and Dastaar-Bandi would be given to Ranjit Singh. Because of his deep visions (Door-Drishti) Baba Ji already knew about the future of Maharaja Ranjit Singh Ji. Baba Sahib Singh Ji arrived at Bhog ceremony, where the mother of Maharaja Ranjit Singh Ji brought him to Sahib Singh Ji Bedi. She told Baba Ji that his son is too young and still missed some qualities for being a leader of the army. She requested for the blessings and protection of her child. Baba Sahib Singh ji said, “O mother the path of your brave son cannot be crossed by the river Sindh itself. Victory will be attained by him and no one shall be able to defeat him. The true Guru is accepted by you and so your protection will be done by Guru Nanak Dev Ji himself.”

In this way, the teachings and philosophies were spread in all-over Punjab by Bhai Sahib Singh Ji Bedi Una Waale in all corners of Punjab. Discourse sessions were held and Sikh Center’s were opened across Punjab. These Center’s are known as Damdama Sahib Baba Sahib Singh Ji. Baba Sahib Singh Ji always played a vital role and participated wherever possible until their last breaths enjoyed the bliss of being one with Waheguru.